FROM THE STONE TO THE POWDER – VATEVI COLLECTION


The weapons accompany the Man since the human inception. The appearance of the first tools and weapons marked the separation of the Man from the animals.

Through the present-day Bulgarian lands hundreds of tribes had passed. They left traces in the material and spiritual culture of the region. The Balkan Peninsula is an arena of many battles over the millennia. Therefore there is a great multitude of diverse military artifacts.

The exhibition presents a rich and interesting collection – Vatevi collection. It is the outcome of a long collector’s passion and patriotism and a result of affinity for the weapons of several generations. With reason we can say that this is the richest private collection of weapons in Bulgaria and is at one of the top places in Europe.

The first known weapons are from the Stone Age (Palaeolithic). To produce them the Man has used animal jaws, bones, horns and teeth, wood, stone, flint. Stone axes appear in the Bulgarian lands during the Neolithic; the axe-hammers – at the beginning of the early Chalcolithic and most widely are found in the late Stone-Copper Age, when along with the stone-made are manufactured and copper specimens. The first specialized weapons for close combat are the stone maces. In the Bulgarian lands they are known from the Neolithic period. During the Stone-Copper Age they increase in number. The first exemplars made of copper appear and later such made of bronze. In the early and middle Bronze Age specimens of stone, including marble and of metal are found. Their function was similar to that of the stone axe-hammers. They were used as weapons for close combat and as symbols of power and prestige. Specimens of copper, bronze and lead in the collection are so far unmatched in Bulgaria.

During the 5th millennia BC (Copper Age) when in Anatolia there are no heavy copper tools and Western Europe do not even know the first metals – copper and gold in the Bulgarian lands the foundations of the metallurgy are laid. The Balkan craftsmen transform the pieces of rock in the desired weapon, producing the most beautiful and highly appreciated copper axes. They apply sophisticated technologies for closed molds-molding. The result of this activity is in front of you. The collection of metal artifacts from this and the next period in Vatevi collection is impressive (wedges, chisels, flat axes, heavy copper axes, axe-adzes).

During the 6th and 5th millennia BC, the Balkan Peninsula occupies a prominent place in the history of European metallurgy. With the ability damaged and unusable tools and weapons to be re-melted and to produce from them new ones, changed the attitude of the man to the nature. The metal might be accumulated and when necessary to be invested again in another object. Finished products, including weapons played an outstanding role and were donated, exchanged, used in the renewal of the relationship between the individuals, families, protonations. In all early historical societies the weapons were subject to different religious and cult practices.

With the invention of the first alloy – the bronze, the first small bronze daggers, flat axes. The introduction of bronze contributes to increasing the effectiveness of the tools and weapons. In comparison with the copper ones, they have several advantages – they are solid and sharper, and molding them becomes considerably easier. The earliest metal tools and weapons repeat the forms of the stone ones, but the accumulated manufacturing experience and quality of the new material leads to the emergence of new forms. In the middle Bronze Age axes are made with massive hole at the upper part. In the 3rd millennium BC they become dominant weapon and at the end of the era a wide spreading receive the hollow bronze axes with or without an ear – the "Celt" type and bronze knives and double axes, spearheads, rarely maces, scepters, halberds. There are new, previously unknown weapons made of bronze – the swords.

The cultural processes at the end of the Late Bronze and Early Iron Age marked the final stages of formation of the Thracian ethnos. This is the period of transition between the prehistoric cultures and the classical Thracian history. Along with the mastering of the metallurgy of iron, the social and tribal differentiation in the Thracian society emerged. This transition is represented by single- and two-bladed iron swords (makhairas, akinaces) iron spearheads, flat cross-axes, knives (makhairas, akinaces, rhomphaias, sciphoses), followed chronologically by the "Celtic type" swords and Roman swords. A special place is given to the double axe – the labrys. It appeared in the Bulgarian lands back in the Stone-Copper Age (5th millennium BC), long before its appearance on the territory of present-day Greece. Early exemplars are made of stone. Its prototype are heavy copper axes with a hole in the middle, known as axe-adzes (or axe-diggers). The first symbolical depictions of the double axe in these lands are also from this time, two millennia before its making from bronze, and its portrayal on the Knossos’ tiles.

For the first time, on this exhibition a Thracian treasure of the Vatevi collection previously unknown is presented. It consists of four silver cups with partial gilding on the images, two silver gilt phalerae. On three of the vessels a Thracian warrior (a god-horseman, king-priest) is depicted. Presented are hunting scenes, fight between a bird and a snake – symbols of light and darkness, of the underworld and the heavens, death and immortality. On one of the cups and on the two phalerae has images of women, probably the Great Thracian Mother-goddess, presented here as a goddess of victory. On the phalerae of the treasure from the Vatevi collection she, like Nike, is depicted with wings.

The protective armor from the Antiquity in the Vatevi collection presented at the exhibition, is also impressive: bronze helmets – Corinthian, Chalcidian, Thracian type, Celtic, Late Hellenistic iron helmet, bronze mask – a part of a helmet from the Roman era.

Based on the achievements of the rich Antique heritage, the Middle Ages also give their rich and diverse contribution to the development of the military art as technologically and from purely practical nature.

Offensive weaponry is presented by almost all representatives of the arms used in the broad chronological range of the Middle Ages and partly of the Ottoman period in the eastern and southeastern parts of Europe. These are swords, sabers, fighting knives, spearheads, axes, maces, war hammers in a great variety of forms.

Protective armor that could be associated with the Middle Ages is represented by several exhibits. The Vatevi collection contains also chain mail armour, one of which is shown here. Already in the Bronze Age the horses are used for fast moving, transport of goods and last but not least – for war. In the Middle Ages, when is the height of the cavalry war, the horse acquired the status of a "living weapon". Some of these items of equipment of horse and rider from the Vatevi collection are shown in this exhibition.

Opening of the exhibition “From the Stone to the Powder” from Vatevi collection: 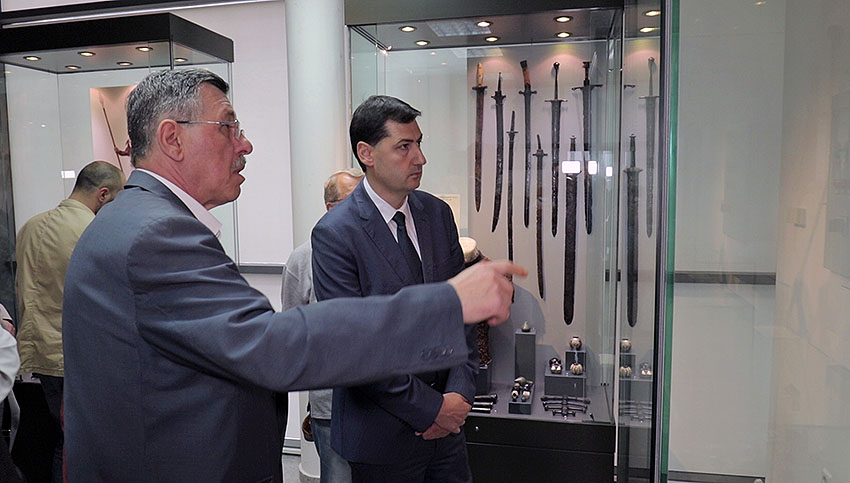 Click here to see photos of the exhibition in the Archaeological Museum in Plovdiv, Bulgaria